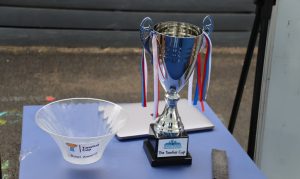 Kia ora e te whanau
There was more than a little excitement in the air as our Year 5 & 6 ākonga were preparing to take part in the Tawhai Cup Finals at lunchtime today! Ruma toru & Ruma whā who were battling for the Bowl Trophy, for 3rd and 4th place were the first to take to the turf. After a hard-fought game of the usual 3 codes that were being played, Ruma whā was the winner of the Bowl!
It was now down to the grand final of the much-coveted Tawhai Cup. Over the last several weeks Ruma tekau mā whā & Ruma tekau mā rima had proved that they were worthy to be fighting for 1st and second place. They had played each other a few times and had had close wins! Today it was to be Ruma tekau mā whā day and they secured the Cup with a reasonably comfortable margin although Ruma tekau mā rima were snapping at their heels.
Everyone agreed that the lunchtime multisport tournament has been a great success and what’s more, it’s been a lot of fun! Well done to everyone who took part in it!
Ka pai to Mr McGarry for your hard mahi in making this happen!